The long awaited day had arrived – we were off to Lady Elliot Island!

Not Your Average Flight!

We arrived at the airport at 7:40, ready for our 8am flight. This wasn’t your run of the mill flight though. The airport itself is pretty small, but an official-looking airport nonetheless. It had a cafe, though as with any airport it was pretty expensive. We also recommend bringing your own water so you don’t have to fork out for it at the airport! Then you are ushered outside and climb aboard. It was the most relaxing check-in we’d ever been through! The plane itself was a cause for excitement, containing only 15 or so seats and the pilot is almost sat in the same cabin as you.

The flight itself was great fun. Being on a smaller plane and only going a short distance, the views on the entire journey are spectacular. We had a quick stop-off in Bundaberg to refuel, but that meant we got an extra take-off and landing, which in that plane was quite fun! You get an amazing view of the gorgeous coastline, and then the endless blue sea. You then start to wonder where on earth this Lady Elliot Island is as there’s nothing you can see but water! Then suddenly it is upon you. A little haven in the deep sea surrounded by a lagoon of clear blue water. The island is so small that as you come in to land it seems like there can’t possibly be enough room for the plane to slow down enough to stop, and you become convinced you’re going to end up in the sea a little earlier than planned! It does stop however, and teeters round to a gentle halt. We made it!

We were then met by a friendly member of staff who gave us a tour around the complex on the island, pointing out where we could get our snorkel gear, store our things and get some food. A tasty refreshing drink was provided as they told us the itinerary for the day. One important thing to note is that whilst there is a whole host of activities going on throughout the day for you to enjoy, you don’t have to do any of them if you don’t want to. If you’d prefer to spend the whole day snorkelling on your own or with your friends – you can!

2:30   Island discovery tour  (tour of the island with info on how it was formed and it’s history)

(Additional activities such as information talks and a guided reef walk are also available, but the times change and you will be told about them on arrival.)

Feeling pretty confident in our snorkelling abilities we decided to skip the lesson and go for our own little reef walk in the lagoon. Whilst you see more when snorkelling, it’s great practice for spotting things in the water, keeping an eye out for little fish creeping out from between the coral.

Afterwards we picked up our gear and suited up! We’d definitely recommend hiring a wetsuit, or bringing your own if you have one. The water is a lovely temperature but a wetsuit will stop you from getting cold, especially if you’re going out of the water and back in again (as on the glass-bottom boat). We all hopped into a seated trailer and crossed the landing strip to get to the boat. Due to the shallow and delicate reef, you have to walk a little way out to meet the boat and all clamber aboard. Then you’re off! From the boat alone you can see a whole host of incredible wildlife. Amongst the heaps of fish we were lucky enough to see some cow-tailed sting rays snoozing in the sand, a few friendly turtles who poked their heads up just feet away from us, and even a huge manta ray. It was so majestic – and a lot larger than I had imagined!

After about 20 minutes of cruising around and seeing what’s below, it’s time to head in yourselves and get up close to the sea life! You get another 20 minutes to explore on your own and see what you can find. The fish were so beautifully colourful and all different shapes and sizes. Among our favourite were the parrot fish, and also a huge shoal of trevally all swimming in a big spiral. And of course your trip wouldn’t be complete without identifying the whole cast of Finding Nemo. You then haul yourself out of the water an back onto the boat to be taken in to shore, where lunch is waiting for you. 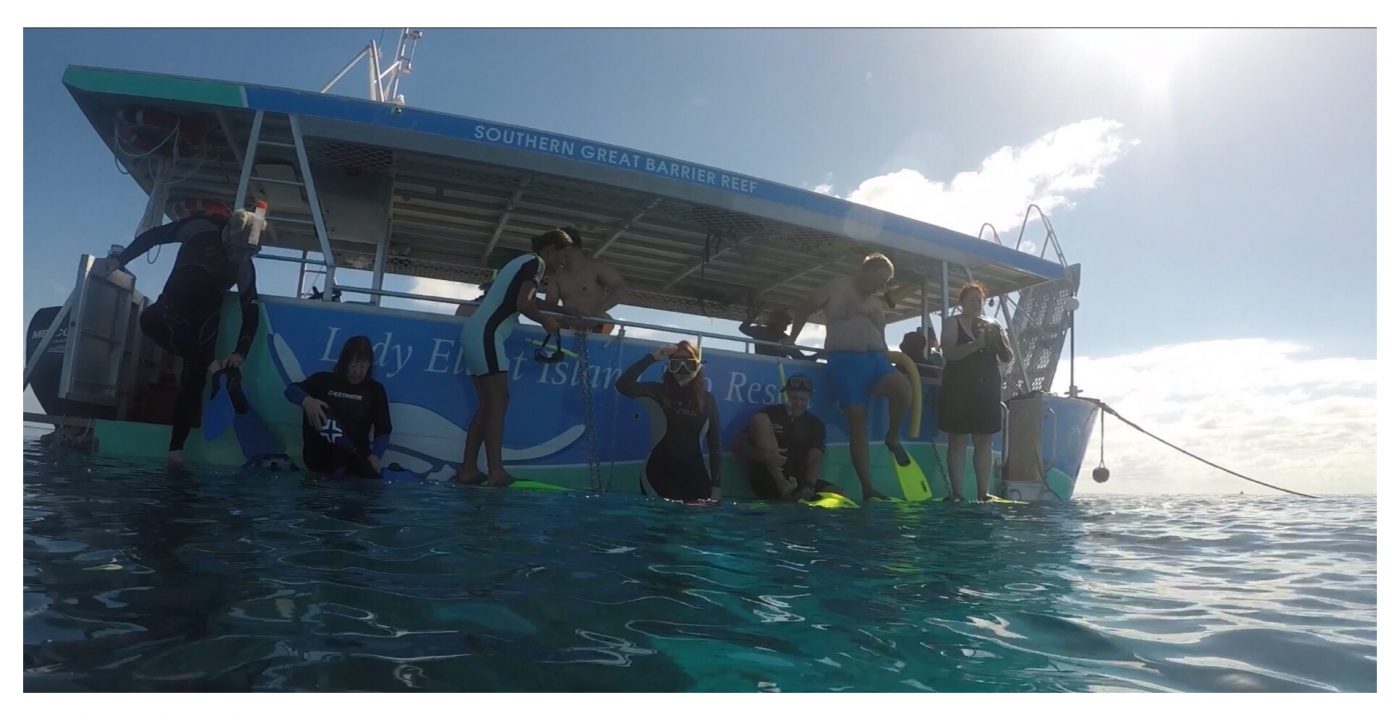 As we were already in the best snorkeling spot we decided to postpone lunch and head back out into the water, cycling back round to the lighthouse where the boat first picks you up. The current took us nicely and the swim would only take 15 minutes or so, but we took our time trying to see as much as possible. Our efforts were rewarded! We saw lots more beautiful fish and a shoal of squid! Is it a shoal? I don’t know… but it was pretty cool! The highlights were definitely the green turtles, which allow you to swim right up close to them, and a white-tipped reef shark. (Don’t worry they won’t hurt you – if they would I am the last person to be in any kind of proximity to them!!)

Feeling very pleased with ourselves we made our way back for lunch. There was a delicious selection of food waiting for us and plenty to go around. It had not all been eaten by those who had headed back earlier for lunch! We had calamari, steak, aranchini and lots more besides, including desert. As travellers used to two minute noodles this was definitely a treat. There’s also an outdoor seating area overlooking the sea which is the perfect spot for lunch.

Despite the delicious food, we wolfed it down so that we could get back out into the sea. We really wanted to make the most of what Lady Elliot has to offer. This time round we saw a slightly smaller manta (which was still awesome) and an even bigger reef shark – eek! We definitely felt we’d done our best to get as much from the trip as we could. We then high-tailed it back over to where there was some fish feeding, the last activity on the list. It was pretty cute, with all of the fish swimming around your ankles and darting at the food. It was also nice to learn a little bit about them and the island. We would say however that if snorkeling is at the top of your agenda stay in the water as long as possible. 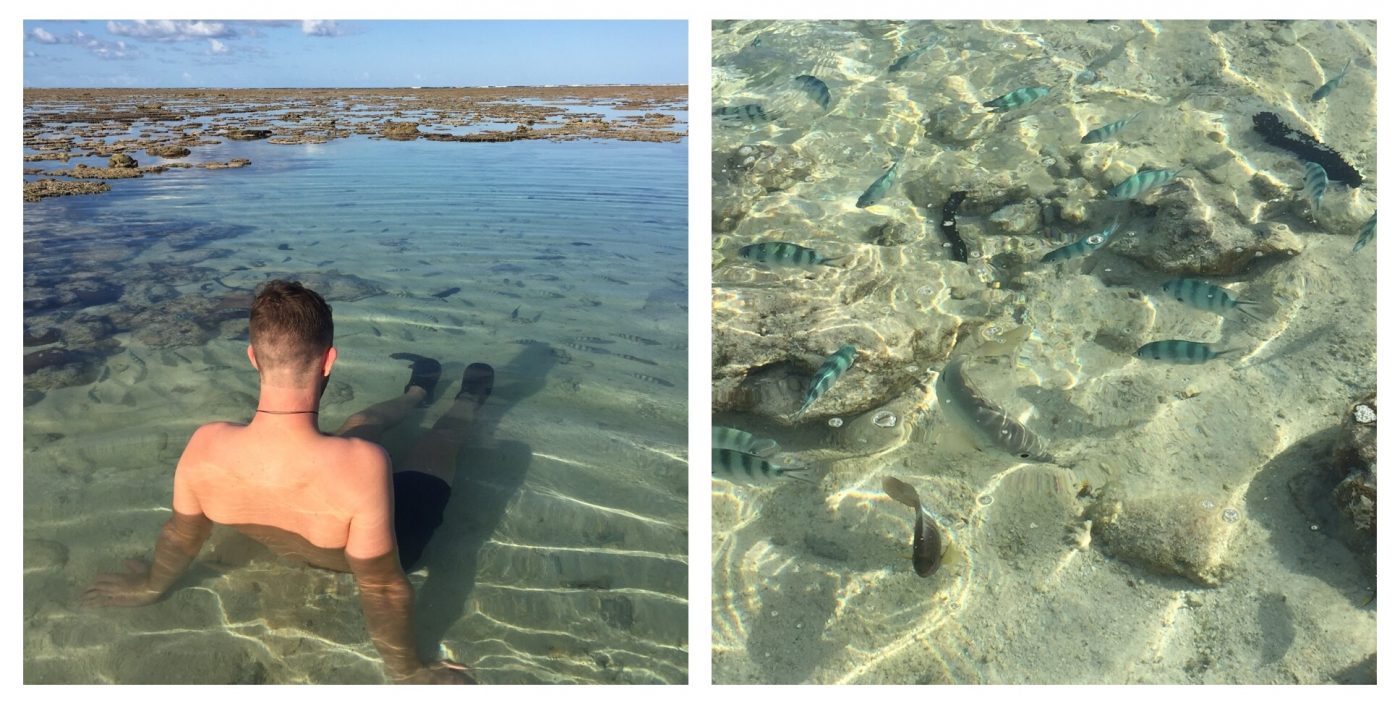 With the last bit of time left on the island we dried off and had a quick peek around the museum area. It had lots of information on the local sea life and we had fun picking out which things we’d spotted. Suddenly it was as though the day had disappeared in a heartbeat, and it was time to head back. We hopped back on the plane and off we went. The ride back was no less spectacular than the journey out – even more so actually! The sun was starting to lower in the sky painting everything sunset orange, and a couple of whales were surfacing underneath us. The pilot circled round them so we could all see them, and they were so incredible! Possibly one of the best ways to see whales as you can see the whole of them just under the surface of the water. We also saw dolphins, sharks and the odd manta ray, so keep your eyes peeled on the journey home!! We also flew over Fraser Island, which was again beautiful to see. 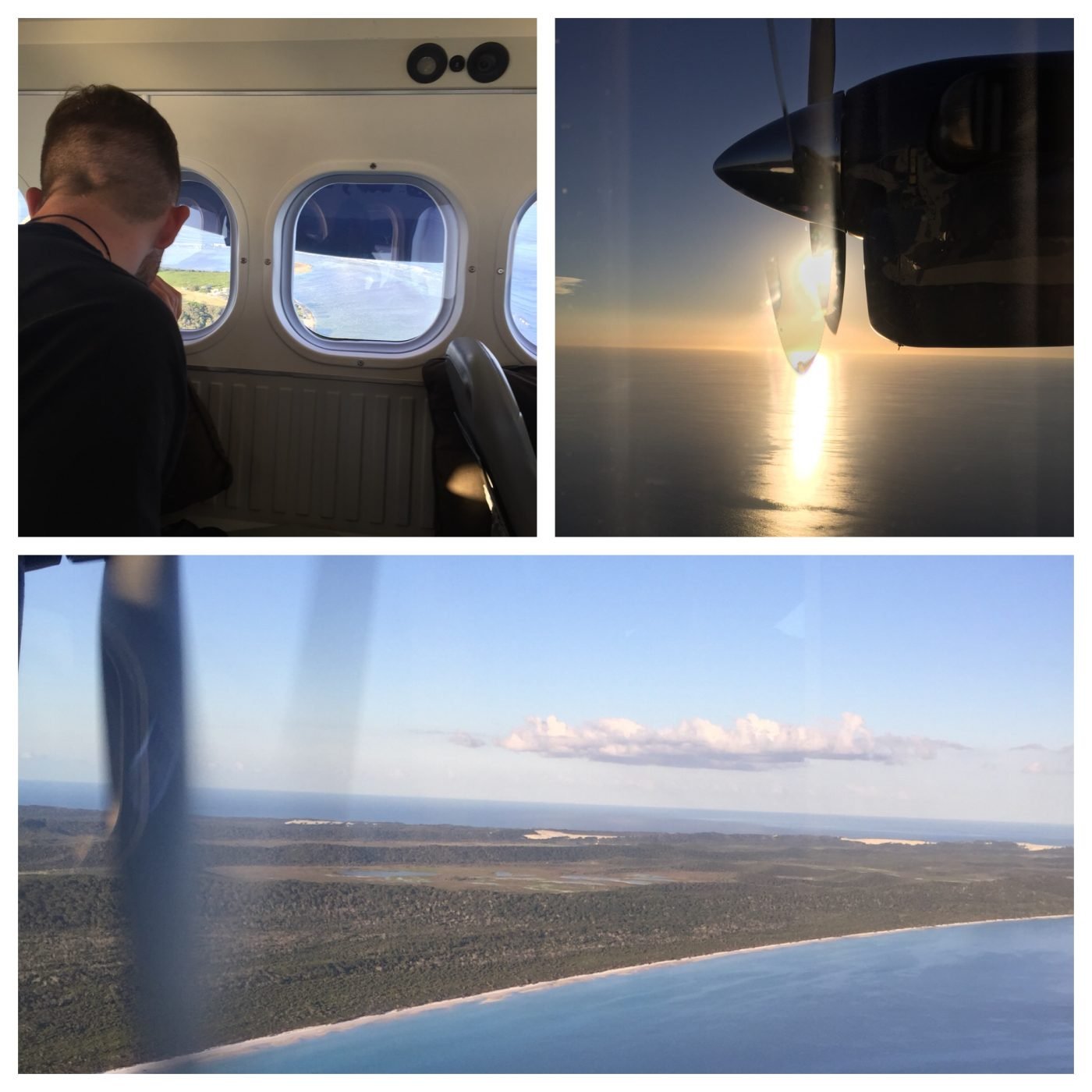 On the way back to Woolshed we still couldn’t quite believe all of the amazing things we’d seen. It was definitely a trip we would recommend to anyone who loves the sea as much as we do!

Don’t forget to take a look at our other blogs, Facebook page and Instagram for cool things to do in Hervey Bay, and if you’re interested in checking out more sea life along the Fraser Coast make sure to read our dolphin blog!